Our Neighbourhoods Team rounded off their successful two-year transformation programme with an award and a commendation at the NLG Conference Awards 2019.

By restructuring our teams, consulting with customers, empowering our staff and investing in training, our Neighbourhoods Team has made giant leaps forward in their frontline services. It's been part of our commitment to be an outstanding landlord, delivering a consistent customer experience where we are 'brilliant at the basics'.

Our Neighbourhood Services Manager, Brooke, has played a vital part in the team’s success and we were delighted to see her take gold in the ‘Rising Star’ category of the NLG Conference Awards 2019. 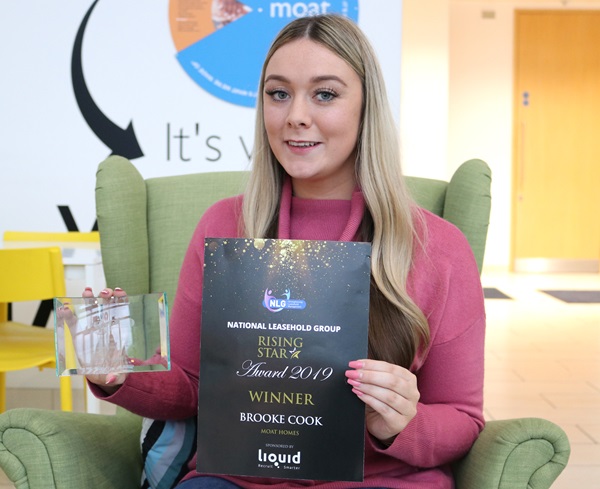 Brooke joined Moat as part of our apprenticeship programme and her natural ability with leasehold management saw her rise to the position of Neighbourhood Services Manager. Since then, her tireless work and dedication have achieved record levels of resident satisfaction amongst leaseholders.

Brooke said: "Now that I have got over the stage fright and shock of the win, I would like to say, from the bottom of my heart, how honoured and grateful I am to have received this award. I also want to say a big thank you to the West Kent Neighbourhoods team, Neighbourhoods and Moat as a whole for all the support, guidance and opportunities they have given me."

The transformation of the Neighbourhoods Team as a whole also saw them ‘Highly Commended’ in the ‘Team of the Year’ category of the NLG Conference Awards. This category recognised the ways in which the team has delivered and influenced service excellence.

Both awards round off a year of positive and continued growth. Stephen Walker, Director of Neighbourhood Services, said: “Brooke’s Rising Star Award is entirely of her own making. Her commitment, professionalism and perseverance have seen her go from apprentice to the high-performing Neighbourhood Services Manager that she is today. I’m exceptionally proud that both she and the entire Neighbourhoods Team were recognised by the judging panel, and that our focus and transformation over the past two years have been recognised.”