We are delighted to have been presented with a cheque for £5,000 by Mr Dil Thandi on Friday 1 March, at a ceremony at Ekta Ghar, one of our retirement living schemes in Gravesend which has served the local Asian community for many years.

Mr Thandi’s grandparents emigrated from the Punjab in the late 1970s and settled in Gravesend.  In 1994, they were offered an apartment at Ekta Ghar, where they lived happily for many years. Mr Thandi, a local businessman who has strong connections with the area, made the donation in memory of his late grandparents and for the fond recollections he has of his childhood while visiting his grandparents at their home in Ekta Ghar.

Along with the donation, which will be used to brighten and revitalize the communal areas at the scheme, the family also contributed a plaque in honour of his grandparents. Mr Thandi said; “This is a special day as it’s the 20th anniversary of my grandfather’s passing, and Ekta Ghar has always been really close to myself and my family; it’s a vital part of the community in Gravesend and part of the story of many families locally”. 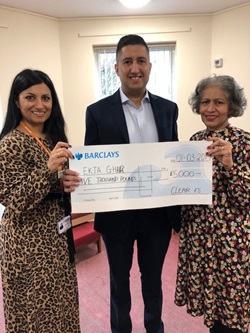 Rajinder Manger, Our Head of Supported and Retirement Living, said; “We were so delighted that Mr Thandi got in touch with us. This donation is such a heartfelt gesture as many of our current residents still remember Mr Thandi’s grandparents. The donation is going to make a great difference to the Ekta Ghar community and we look forward to inviting Mr Thandi and his family back in the coming months to see for themselves the amazing changes they will have contributed to.”